"'The music just flowed from him,' wife Laura said of composer Earle Hagen.

"Hagen, who is heard whistling the folksy tune for 'The Andy Griffith Show,' died at his home in Rancho Mirage, his wife, Laura, said Tuesday. He had been in ill health for several months...

"'He loved it,' his wife said. 'The music just flowed from him, and he would take off one hat and put on another and go on to the next show.'..."

A fair lifespan musically wonderfully spent.
How oft' we have each,
walking down a hallway or strolling down a lane,
driving a happy road
or perhaps washing dishes,
pursed lips and blown breaths
precisely as he did that time -
that time he whistled into a mic,
and made us all picture for years to come
and maybe forever
the day and the lake
on a backlot in the
San Fernando Valley
and the boy who would grow up
to be a favorite director
as the young child character Opie
throwing a stone
into the water as his pa
proudly looked on;
and we,
quietly inside our future memories,
just kinda figured
the whistler
was Andy.

Whistle loud
Whistle long
I always liked to whistle
That song
Posted by ojeano at 9:19 PM No comments:

Ze Frank asked for this on his blog today. I liked what I wrote, so I'm putting it here, too:

Ze: would love your story
i am interested in a particular memory: the uncomfortable moment when you first see your parent (mother or father) as being weak...being human. could you describe that moment? and tell me how old you were.

Me:
My dad was planting a rosebush in the backyard for my mom. I got to go watch him. I was small enough to be up to his shoulder when he was squatting down. The rosebush was potted in a metal can, and he cut the can with pruning shears to split it open to get the rosebush out.

As he maneuvered the plant and pot to release the plant, the metal can cut his left hand between the thumb and forefinger. I had never heard the "S" word before but I understood right away what it was for. I can still hear it the way he said it - a primal "S" word, no time to think about who might be standing nearby.

He put his hand to his mouth and spit an arc of blood to the grass behind him. The afternoon sun caught highlights of red and yellow orange against the backdrop of green lawn. He was wearing a black plaid shirt he wore a lot in those days. I waited silent a moment then asked if he was okay and he said, "yes," and kept planting, "sorry about the cursing."

What happened to the moment next falls into imagination. Did I go get my mom? Did he go treat the wound? Did she come out and ask what happened?

I still see the sunlit arc of blood and spit and green grass and still sense the toddler's insight that Daddy is one of us.
Posted by ojeano at 6:39 AM No comments:

Making it Up as We Go

"Planning" is the ability to apply hindsight to the future.
Posted by ojeano at 1:00 PM No comments: 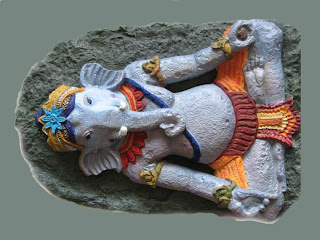 This is Ganesh. He is the remover of obstacles. I bought this one at Target. He was made to look ancient, rustic, carved from stone, dug from the depths. He was all one color. This didn't sit right with me, so I went to the cabinet, moved a couple things out of the way, took out my paints and brushes, and painted him as I imagined he would have looked when he was new, had he really been old.
He is happier. So am I.
Posted by ojeano at 12:12 AM No comments:

If you commit to kindness and compassion you can always escape to a larger perspective.

If you commit to being rotten and mean your world becomes ever more constricting.
Posted by ojeano at 12:05 AM No comments:

Dharma of the Dachshund 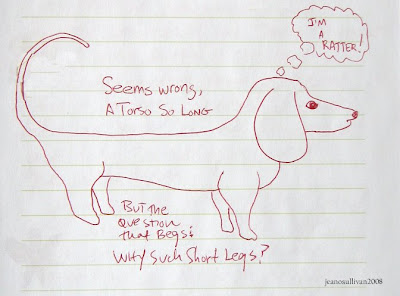 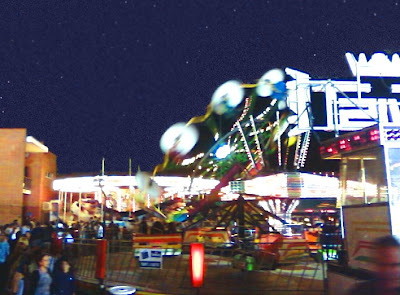 The Catholics had a fair last night.

I know, because I was there alright.

I did not try the carney-rigged rides

(to spare losing the contents within my insides).

The rides held up fine, there was laughter and ease

The Catholics raised money in honor of the saints.

All the revelers seemed happy; I heard no complaints.

As I entered the venue, a priest said hello.

Though I'd never met him, he was among those I know.

Sure there's a fatherly quality about his profession,

(I wonder if he knew it's been a while since confession).

Posted by ojeano at 1:51 PM No comments: