No hot shower. No soft bed. Sunlight glaring in your face before you are ready to wake. Noisy trailer generators hum at varied distances, masking the sounds of birdsong you wanted to hear. Sap on tabletops. Your ancestors strived to live indoors. Conestoga wagons in the hot sun.

Now there is a caveat: a hike too far from civilization to plug in anything, a remote location where the stars at night seem to arrive in shifts as your eyes adjust to the darkness, a cool snow-melt lake, waves gently curving to shore as they have been since before humans took over, bare basics of food packed in, trash packed out, peace, quiet, observation, near silent walks on soft fallen pine-needles, conversation with like-minded companions, birds that flit, swoop and sing.  Raise the food high away from bears and deer, wrapped well against the squirrels.  Stare at the sky through branches, boughs even, rest. Of course there is a reason to camp. Do I want to go?  No.  But do I want to be there? Of course. 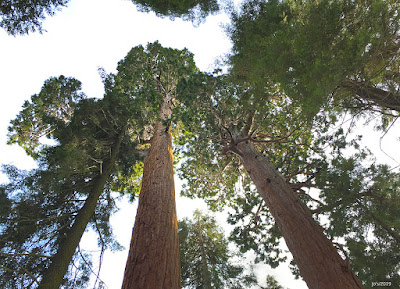 Posted by ojeano at 7:20 AM No comments:

That feeling when you’re not afraid of spiders and go out of your way to put them outside when you find them in the house, but as you walk to your car in the summer night you’re pretty sure you walked through a web so you run your hands down your arms and feel that perhaps you’ve brushed off the web and that the spider is not with you, but you feel a little bit like a bad actor who doesn’t really commit to the role and you know you’re not certain that you’ve accomplished the task—if there was a spider at all.

That feeling that feels like a three quarters truth that there was no spider; it was just a stray hair falling along your bare arm, you get in the car and begin the drive home, a block or two a tickle: is that the light touch of spider feet on your hand? Can’t look. Traffic to contend with no it must be that hair.

That feeling as you recognize in no uncertain terms spider tracks on your hand so you fling and shake the hand outward toward the passenger seat and figure you’ve launched the spider away to somewhere else in the car. You don’t want to open the window and kill it, but please stay in your own territory Spider, now you have your place.

That feeling as you drive down the boulevard that maybe there was no spider and the lady on the radio is talking about her life so the subject is now in the past, irrelevant.

That feeling as your peripheral vision captures, as if a cartoon silhouetted against the driver’s side window, a really big spider dropping from the ceiling working its web line for dear life and you flinch (and you drive safely!) and though you know that spider is more disrupted and more scared of you than you are of it, still you're sent into the throe of a squirm, wiggle and a vocal pitch of a “whoop-whoop!”

Focusing on driving skill you make your turn and turn again into the alley to slow by tree branches so you can open the window and let the spider out and you finally get a good look: stripes like a zebra, spotted like a leopard, the size of a nickel! Relief it’s not the orb weaver whose boundaries you’d been so bent on respecting all week.

That feeling where you hope you didn’t just accidentally crush it between the window and the frame, and you haven’t, and you introduce it to its new home but it now knows only you and tries to stay, or maybe it’s confused because it is rushing toward you as if panicked so you open the door and with the motion it drops on its line to the alley floor so you close the door and race away. That painful suspicion that the spider is still attached to the car, hanging on for dear life like James Bond on the rail of a helicopter in the Alps.

You don’t have much farther to go and you pull into the garage, park and close the garage door. You open the car door and there—it—is. It has made it through so much, still trying to get a semblance of place it perches on the bottom of the car door frame. Is it catching its breath?

That feeling as you get out of the car and look to the shelves and grab for something to capture it in and you find the lid of a spray paint can. Now you can catch the spider and put it on a plant. That is all you wanted.

That feeling as it quickly drops to the garage floor and runs under the car and away. Fair enough.

That feeling as you leave the scene to go into the house that spiders are crawling on you. That sense persisting as you take care of a few chores. The quick spin and brush of the arms, pats of your shoulders, slaps at ghosts of spider webs as they suggest themselves again and again.

How sensitive we are to these ages old relationships. Human to spider, since forever ago I’m sure—sudden surprise entanglements that linger.

Posted by ojeano at 1:07 AM No comments: