A Cat in the Ceiling

A friend is looking to buy a house. I went with her and the real estate agent to see a few today. In one, which had been foreclosed upon while the residents were remodeling, there was a hole in the bathroom ceiling over the tub. I thought I saw insulation sticking out of the gap but the sunlight through the window showed it to be a cat's paw. On entering the house I'd noticed it smelled like cat urine and mice, but now I assessed the strength of the scent to be simply dead cat.

I called, "Here kitty kitty...?" but the paw didn't flinch. I thought to reach up and touch it but the thought of the feel of it, dusty and still, stopped me. The agent and my friend had left the room by now. I decided to choose to think of it as a long petrified cat corpse and moved on. The agent would tell the selling agent and procedures would take place.

We visited the back bedroom where the ceiling was falling in, spotted black with mold, and the back yard where an addition to the house had been started and now the skeleton of it, soaked by rain and dried in the sun, had begun to split, splinter and peel.

As we left the house I stopped by the bathroom again to see if the cat was still there.

The kitty was gone. Long live the cat!

Here we had an abandoned house, an abandoned dream, plans for the remodel taped to the living room wall "do not remove" stamped legal and permitted but now expired. The people who had been living here couldn't afford to keep the house, so the bank took possession of their asset which now rots among a glut of houses facing similar fates.

But, if, when foreclosure threatened, the bank had refinanced the house based on the constraints of the current economy and let the residents keep it at the reduced (i.e., "market") price, the owners would likely have been able to make the payments and the house would be a home to more than the mice and the cat and the fungus.

Does that simply make too much sense? 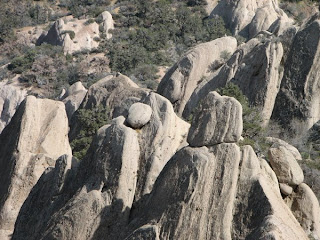 This is the Devil's Punchbowl. It is where three tectonic plates meet in California, on the San Andreas fault. More detail here.

Note the placement of the big ball boulder and the big sedimentary boulder. Earthquakes do neat things when considered from the vantage point of having no people around.

We went hiking there and as there was no earthquake at the time, we were not chewed up like so much taffy. It was a very good day!
Posted by ojeano at 1:28 PM No comments:

Artist in a tumult
and the hopeful consolers say,
"Life goes on..."

To this sort
the interpretation is of a sentence laborious
weighty and grave.

Artist in a tumult
reassurance is this:
"Creativity continues."

As the foil wrapper from the chocolate candy
magneted to the inside of my medicine cabinet reads:
"the best ideas come
when you think you've just run out of them."

Happiness is a dog that waits at your feet
ready jump into life as you do.
Posted by ojeano at 6:57 AM No comments:

UFO in Bermuda - apparently filmed by some international vacationers. Thanks to johnooo for this remarkable footage!

facebook seems to me
an individuated mob.
Posted by ojeano at 5:32 PM No comments:

my note to AIG execs

MoveOn asked if I had a question to submit to the AIG execs. Here's my rhetorical:

How can you sleep, let alone eat, knowing how much damage you have done to the American people and the world with your greed? I have no further questions. Bonuses denied. Your assets, homes, down to the silverware, should be liquidated and the proceeds returned to the American taxpayers.

It is very clever the way they have assumed the position of having the right to give permission about anything. Where's Alcatraz when ya really need it?
Posted by ojeano at 9:52 AM No comments:

Walking with a Shape Shifter

Went walking with a shape shifter
dog then lion then lamb
and then a cat, and after that
saw a diamond hologram.

Went walking with a shape shifter
impressed me to no end
then confused and then was gone
but loved by a consistent friend.
Posted by ojeano at 11:54 PM No comments:

money is more expensive to the lower paid

Hospital administrator suggests cutting salaries at the top rather than laying off the lower paid employees. Wonderful indeed, but DUH!

The obvious solution to potential layoffs is for those with more financial flexibility (read: more money!) to take paycuts or yes, even forego their bonuses! It astonishes me that it took until 2009 for this idea to occur to a high level administrator. I'm glad it did, and I hope it becomes a trend. And if those who practice it are encouraged by getting their picture in the media, then how about making it a daily feature, see how long a list we can get? Have I said "duh!" yet? Tsk. DUH!
Posted by ojeano at 11:16 PM No comments:

Real friends, true friends, friends with whom I have shared experience and time and realization and laughter and poignancy and sandwiches, keep asking me if I'm on facebook. I say, "nope."

From time to time I ask one of these real life actual genuine friends to show me what's so great about facebook. So far, nothing makes me want to be on the thing. So far, every mini-tour I've been on, "See!? It's great! You have these and this and look at this!" resonates nothing; it's the antithesis of thud and wow - white on white is all I see. But I also get a little sour tummy squirm, slight nausea when I look at the sterility of it, the vapid not much at all really of it substance-free virtuality.

This video by Julian Smith sums up my future complaints, that is, were I to join. I will wait for facebook to be over, just like I waited for the SUV's to go away.

If anyone wants to find me, I'm right here.
Posted by ojeano at 9:25 PM No comments: