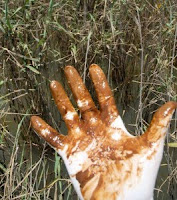 -thisisnotaspill.org
Yes, technically a "spill" could be huge and out of control, but thisisnotaspill gets it right - we think small when we think "spill".  "Don't cry over spilled milk!"  "Spill the beans [and tell your secrets]."  "Spill your guts! [and make your confession]."  We need to start using language that conveys the enormity of this global hemmorage, no that still says it too small: this gaping bleeding wound, no that's not it, this disasterous massive... come to think of it "blowout" is too humble a term, too.  BUT, it's a start.

Thank you Kathy Gill, for reframing the story more appropriately (and for the photo above captioned: "Thick oil in the waters and marshlands along Louisiana’s coast, near Pass a Loutre (19 May 2010). Via Gov. Bobby Jindal's Office").  Thank you also to Spyra for drawing attention to the thisisnotaspill.
And hang on a minute: how did we make ourselves vulnerable to this kind of money-first global management strategy?

Also see the Rolling Stone article: "The Spill, The Scandal and the President: The inside story of how Obama failed to crack down on the corruption of the Bush years – and let the world's most dangerous oil company get away with murder."

And in another some-odd few years, when people start chanting about "government regulations threatening our freedom!" you can mention the catastrophe above (or go back a year and a half to Wall Street, which we're still paying for.  Note to self: pay credit card at 26% interest by the 20th to avoid $30 late fee), or you can simply agree with them.  Say, "Yeah!  And let's start by getting rid of all those damn government run traffic signals!"
Posted by ojeano at 7:27 AM No comments:

We Are Just Too Much

"It's nonending for a while."

In wondering where a particular common quote came from, I found this:

Musick has Charms to sooth a savage Breast,
To soften Rocks, or bend a knotted Oak.
I've read, that things inanimate have mov'd,
And, as with living Souls, have been inform'd,
By Magick Numbers and persuasive Sound.
What then am I? Am I more senseless grown
Than Trees, or Flint? O force of constant Woe!
'Tis not in Harmony to calm my Griefs.

Anselmo sleeps, and is at Peace; last Night
The silent Tomb receiv'd the good Old King;
He and his Sorrows now are safely lodg'd
Within its cold, but hospitable Bosom.
Why am not I at Peace?

I conjecture BP never had any intention of cleaning up the spill or stopping the flow because their objective - since even before the explosion on the rig - has been to get that oil and use it as product at any cost (hence ignoring the rig workers' safety complaints and firing those who spoke up too often and slowed production).  BP's concern is that the well blew up and now they're losing money.

So, resources haven't been poured into stopping the spew, they've been dedicated to salvaging the well's production. Attempts to cap off the gusher with domes and boxes, covering it up with mud, were ruses. That trick where they sawed off the pipe ahead of the kink causing a tremendous increase of the flow? That wasn't a prelude to putting a lid on the force of oil, it was readying the pipe surfaces for a fitting so they could siphon oil off to a tanker. Mere prep work. As I've said here before, any six year old who's played with a garden hose could tell you those methods wouldn't work.

Public outcry surprised them with its insistence, first as a buzz of a mosquito they thought they could wave away and now like a buzz of maybe half a dozen mosquitoes, they eighth-heartedly wave their little hands toward solving problem by making grandiose "attempts to cap the well!" So far they have seemed simply stupid: but you don't get that rich being stupid, unless you're stupid like a mega-macro corporation! The smart people are the ones tasked with finding a way to salvage product (and the boss' people pleasers are the ones making up the dog and pony show as we go along).

Even though BP has such extensive wealth that if they were to put massive effort into a 100% clean up of this mess they'd still be solvent, that's not where the money is: Their response, lack of contrition and inability to admit full financial responsibility urgently and above all demonstrates they do not perceive the issue at hand to be the ocean, sea creatures, beaches, wetlands, tourism, or the fishing industry (when they get their lives back, they can have steak instead of seafood).  As for the lives and generations of fisherfolk who rely on small boats in one considerable geographic patch of sea? Piffle!).

There is no concern for the overall health of the planet let alone the immediate health of those affected by the toxic mess.  BP blamed the sickening of the first of the clean up workers on food poisoning.  Stopping the loss of potential profit is the only problem they're intent on solving.

Watch the story unfold: they will capture most of the oil.  They will get the leak down to about 20% and return to business as usual, if we let them.  And it's likely we will come to accept the sludge slick that slathers its way around the planet for the next generations, just as we have accepted the Texas-sized Great Pacific Garbage Patch.

Witness our friends and family trip to El Capitan beach in California a couple of years ago.  As the sun set, an oil slick that had been hovering off the coast (from the derricks off the coast of Santa Barbara) came to shore.  We couldn't get back to our campsite without walking through it.  We all complained as we wiped the crude off our feet and sandals with nice greasy lotions, but we accepted it as normal, though frustrating, because Santa Barbara beaches have *always been like that.

I am not quick to take a cynical view, but this one's just too obvious.

*First trip to Santa Barbara beaches circa 1968.  We swam and ran and played and laughed.  I got freckled and blonder from the sun and my dad taught us how to get crude oil off our feet using margarine and paper towels.
Posted by ojeano at 6:36 AM 2 comments:

Dot Earth.
Great worth.
Posted by ojeano at 5:15 PM No comments: