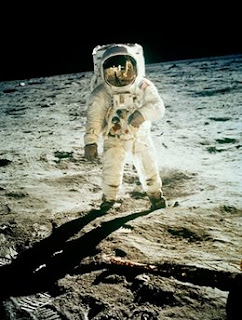 Here are lots of great pics of the moon landing, 1969.

I remember when it came on TV, we kids complained that our regular shows weren't on. Our parents tried to explain the significance of the event, but we just didn't get it.  I have the best excuse because I was the youngest.
Posted by ojeano at 7:15 AM 1 comment:

Inseam Let Out of Fat Suits

Huh... and just this morning walking down the road thinking, "If they ever make a movie that takes place around the year 2010, they're gonna need a lotta fat suits."

Read:
Number of Fat People in US to Grow, Report Says
Posted by ojeano at 7:12 AM No comments:

Worth staying through to the end:

I recognized one of the guys in the above, from one of my fave I Love Lucy episodes which would come along about ten years later:

Okay, now that we're warmed up:

Posted by ojeano at 2:32 AM No comments:

"Jones, who is known for posting signs proclaiming that Islam is the devil's religion, says the Constitution gives him the right to publicly set fire to the book that Muslims consider the word of God."

There is a story in the news today about a fundamentalist Christian pastor in Florida who wants to burn copies of the Quran in efforts to kill the influence of Islam.  Ah!  Torn from the headlines we are presented with a fine example of the religious zealot as evil twin.  Here's how it works:

What happens in every plot where there is an evil twin to the respectable protagonist (i.e., "good twin hero")?  The evil twin gets away with his evil deeds for a time, but eventually the good twin hero gets free of whatever traps the evil twin had set for him (gets untied, escapes the lair, swims past the alligators).

The evil twin is charismatic, convincing, seems kinder and gentler than a lamb.  For a moment, even the audience is in doubt!  The good twin is rightfully angry.  The evil twin appears earnest as a lost puppy.  But as the secondary hero wavers seeking the truth, the evil twin snaps - he shouts as he points his finger at the good twin hero:  "Kill him!  Kill him!  Can't you see HE'S the evil one?!?"

The good twin hero knows his humanity will outlast the moment, trusting the secondary hero to recognize the characteristic plea of the evil twin.  Depending on your production, and whether there's a sequel in the works, the evil twin will be wrested into handcuffs, knocked out cold or shot.

Now apparently this struggle between good and evil has been going on since the time of Caine and Abel.  Actually I believe it traces back to the introduction of matter to anti-matter but let's stay on the pastor's turf a little longer, as here we are back at the beginning of our tale about him.  There he is, standing in the bright sun, arms folded, his billboard truck in the background advertising big Quran book burning party!  This man believes he has permission to do this based on his interpretation of his favorite (or second favorite) book, which he perceives to be the word of God, but he hates the book that Muslims perceive to be the word of God.

We can envision an earth sandwich of men like this, one Christian, another Muslim, each vehemently asserting identical declarations.  The evil twin is illusive!  He doesn't wear a special outfit that makes him recognizable!  A wise person will ask himself what is true, especially when he's in a pinch.  Unless the secondary hero has the ability to think for himself, he won't know what to do unless someone tells him (and the good twin hero dies). The secondary hero who has the ability to think for himself can bring his life-experience to the moment, weigh the circumstance, and take appropriate action (and the good twin hero lives).

And we are the secondary hero.  And any leader, religious or secular, who orders ignorance and calls for the destruction of others' beliefs is questionable. I'm not sure about you, but I'm going with the twin who trusts me to make up my own mind.
Posted by ojeano at 7:37 AM 1 comment:

Sometimes along the back of my mind I get a sense memory of driving through a nondescript natural section of Northern California
a winding highway with a long steep grade that doesn't feel steep but calls for a little extra power
and the yellow beige grass and the spots of dark green oaks on the smooth hills and the blue sky with sparse wisp-ended cottony billow clouds.
It's just a part of a trip I once took
In a place where my grandfather had traveled
and where separately, of different lives, my father and mother, my brother and sisters and you and I have all seen this little section of Earth.
At the moment I wonder
if maybe we all felt the same mix of peace and anticipation at this simple passing through.
Not a famous forest, or a labeled rock formation or a declared scenic drive
just yellow beige grass blue sky green oaks
and reverence for a simple moment
that inspired always.
Posted by ojeano at 4:36 PM No comments:

Further Clarification for our Democracy