The Yellow Balloon in July

I don’t like to take out the trash. Where I live, it involves taking the trash out to a locked dumpster having to handle  the dirty lock with your hands to unlock it with a key and it’s tedious.

One day last summer, I had taken the trash out on a Thursday and the following Sunday I went out for my walk and there was this semi-deflated yellow balloon on the sidewalk rolling around.  I thought oh that's interesting.

When I came back from my walk I could see it rolling and bobbing up the sidewalk and I thought if it goes out into the street somebody might think it's a cat and slam on their brakes and cause an accident. I should pick it up.

I got to the balloon and I could see a dog had peed on it and I didn't want to touch it so I went against my good citizen instincts and left it there.

I went into my house to get some things that I needed to post on the HOA bulletin board. I also needed to bring scissors and tape so I got everything I needed headed to the bulletin board. I passed the balloon again and I thought I really should pick that up but I don't want to.

After I posted the document on the bulletin board I had the scissors in my hand and I realized I could just pop the balloon with the scissors and pick it up and throw it in the trash and wash my hands afterward.

So I did, and when I popped it the scissors instantly became tongs for the balloon. So I didn't even have to touch it.  Since there was dog pee on it, I didn't want to throw it in the trash in my house, so I just kept walking past my front door to the alley to the dumpster. I figured I could lift the lid enough to slide the popped balloon in there, especially because the scavengers have bent the locking rail out of shape in attempts to access our trash—so there would be some wiggle room—and that would be that. And I could still consider myself a good citizen.

I had not known mine was missing! And so had I not done the good deed I wouldn’t likely have found my key.

It's also amazing that nobody took it. We have a lot of scavenger traffic out there and I would think that would be a real find for a person who wants access to the trash. 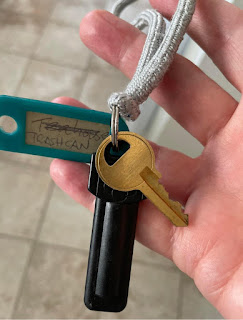